Last week at Ribbonfarm I argued that we don't take the human body seriously enough.

Today I'm going to illustrate what that means with lots of examples (and a few pictures). But first it's important to understand what an embodied worldview is not:

No, what I'm trying to do is course-correct. My sense is that, here in the WEIRDer corners of Western civilization, we've become too focused (at the margin) on the disembodied aspects of the world. As a result, we've become partially blind to the embodied nature of society, politics, and personal interaction.

So the question I'm asking is: how can focusing on the body help us to better understand the human condition?

People often talk about confronting our mortality. I want to see what happens when we confront our biology.

A lot of the way we dress and carry ourselves is aposematic posturing. We make threat displays and mating displays — not unlike those of grizzly bears, cobras, and birds of paradise. Sometimes we're more subtle about it, sometimes not. 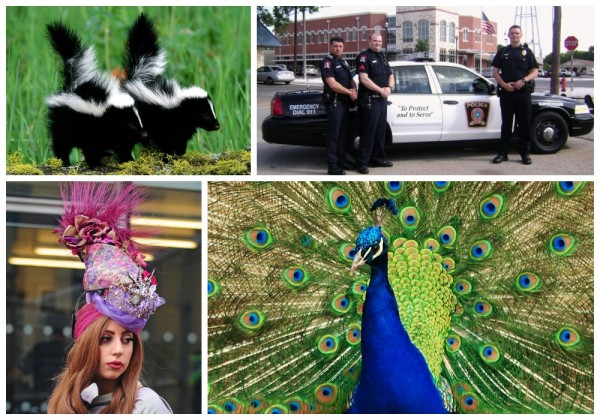 Over at LessWrong, Lukeprog writes about the power of behavioral reinforcement:

Behaviorist techniques like reinforcement feel like they don't respect human agency enough. But if you aren't treating humans more like animals than most people are, then you're modeling humans poorly.

Our societies belong to the same general category as the societies of wolves or ants — groups of animals living together, interacting and depending on each other for their survival. — Axel Kristinsson

Civilization is an exercise in self-domestication.

Civilized people are not unlike domesticated animals. Raising a child, for example, is a lot like breaking a horse. Both creatures need to be tamed, trained to respond to the right incentives, made docile and obedient. We mostly don't beat our children anymore, but we domesticate them all the same.

Civilization depends on manners, and manners are largely about the body — excusing for one's own body, making other bodies comfortable, etc. Consider some of these topics from an 1837 book on manners: the hands, the teeth, the hair, tainted breath, dressing to advantage, presents, walking the streets, entering and leaving the room, general deportment, and physical awkwardness.

Ran Prieur has a beautiful description of agricultural civilization, which he renders almost entirely in terms of the physical:

Civilization happens in cities, where it's crowded. This is no coincidence. Sheer physical density would lead to too much violence without something to counteract it.

Alan Watts muses on the nature of dwellings:

For many people nature means the birds, the bees, and the flowers. It means everything that is not 'artificial'.... We build houses, but is there any difference between a human house and a wasps' nest or a bird's nest? Not really. 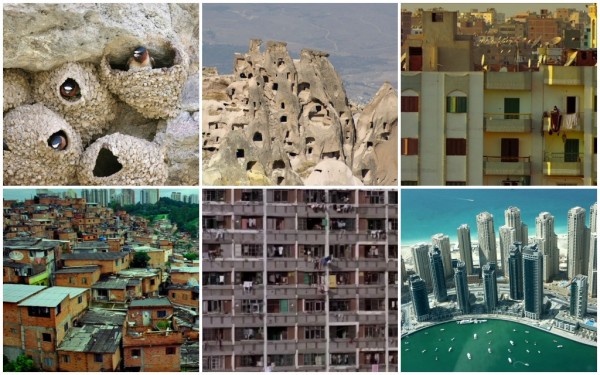 Like many animals, humans are concerned with pecking order or dominance hierarchies, the polite term for which is social status.

Monuments project status because their enormity is intimidating. Cowing before the Great Pyramids, an ancient Egyptian peasant would feel very small indeed — and thus the Pharaohs became gods among men.

Art can be understood, in part, as the socially sanctioned (legitimate) monopoly of space — whether a wall, an entire gallery, or a stage. The physical deference given to art objects (distance, empty space) is not unlike the deference we give to people of high status.

Rituals are powerful because they connect abstract ideas (especially ones of great social significance) to bodily experiences, and vice versa. Rituals of sacrifice are especially potent, since they serve as honest signals of commitment.

We get off on feelings of synchrony and solidarity, and pursue those states of consciousness like we pursue sex. In fact, you can explain a nontrivial amount of human behavior as the pursuit of altered states of embodied consciousness. (That we call these states "altered" is very telling.)

Poetry is embodied language. It's physical. Rhyme, meter, alliteration, imagery, and metaphor all speak to the parts of the brain that process bodily information. The result is a mild trance state.

In Impro, Keith Johnstone muses on the role of the body in inducing trance:

Meditators use stillness as a means of inducing trance. So do present-day hypnotists. The subject doesn't have to be told to be still, he knows intuitively not to assert control of his body by picking his nose or tapping his feet....

Trance states are likely whenever you abandon control of the musculature. Many people can get an incredible 'high' from being moved about while they remain relaxed.

And of course, synchronized dancing and chanting is the most powerful trance trigger, the origin of which lies in the battle displays used by our ancestors to ward off predators.

Ethnicities — like species — are created and defined by endogamy boundaries. So are castes and social classes.

Dowries reinforce castes (and other forms of social stratification) by making it harder for high status men to marry low-status women.

In the West, civil society exists at least in part because the Catholic church pursued a centuries-long policy of prohibiting consanguinity (cousin marriage). Inbreeding contributes to a very different mindset in other parts of the world. 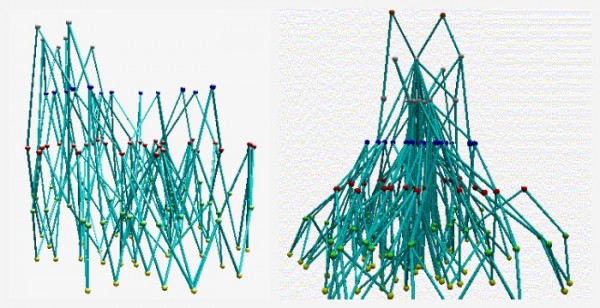 We live in a society with mating patterns like those on the left. But try to imagine, for a minute, what it would feel like to live in the (more clannish) society on the right. More at Wikipedia.

Humans compete for scarce resources in a variety of environments, the study of which is known as ecology. It's a way of thinking that can shed light on a lot of different domains.

One of our oldest ancestral niches — confrontational scavenging — explains a lot of interesting and otherwise puzzles aspects of human nature: why we sing and dance in groups, why we paint our bodies, and why we bury our dead.

In The Lessons of History, Will and Ariel Durant give a majestic account of the ecology of moral systems:

Moral codes differ because they adjust themselves to historical and environmental conditions. If we divide economic history into three stages — hunting, agriculture, industry — we may expect that the moral code of one stage will be changed in the next. In the hunting stage a man had to be ready to chase and fight and kill. When he had caught his prey he ate to the cubic capacity of his stomach, being uncertain when he might eat again; insecurity is the mother of greed, as cruelty is the memory — if only in the blood — of a time when the test of survival (as now between states) was the ability to kill. Presumably the death rate in men — so often risking their lives in the hunt — was higher than in women; some men had to take several women, and every man was expected to help women to frequent pregnancy. Pugnacity, brutality, greed, and sexual readiness were advantages in the struggle for existence. Probably every vice was once a virtue — i.e., a quality making for the survival of the individual, the family, or the group. Man's sins may be the relics of his rise rather than the stigmata of his fall.

History does not tell us just when men passed from hunting to agriculture — perhaps in the Neolithic Age, and through the discovery that grain could be sown to add to the spontaneous growth of wild wheat. We may reasonably assume that the new regime demanded new virtues, and changed some old virtues into vices. Industriousness became more vital than bravery, regularity and thrift more profitable than violence, peace more victorious than war. Children were economic assets; birth control was made immoral. On the farm the family was the unit of production under the discipline of the father and the seasons, and paternal authority had a firm economic base. Each normal son matured soon in mind and self-support; at fifteen he understood the physical tasks of life as well as he would understand them at forty; all that he needed was land, a plow, and a willing arm. So he married early, almost as soon as nature wished; he did not fret long under the restraints placed upon premarital relations by the new order of permanent settlements and homes. As for young women, chastity was indispensable, for its loss might bring unprotected motherhood. Monogamy was demanded by the approximate numerical equality of the sexes. For fifteen hundred years this agricultural moral code of continence, early marriage, divorceless monogamy, and multiple maternity maintained itself in Christian Europe and its white colonies. It was a stern code, which produced some of the strongest characters in history.

Gradually, then rapidly and ever more widely, the Industrial Revolution changed the economic form and moral superstructure of European and American life. Men, women, and children left home and family, authority and unity, to work as individuals, individually paid, in factories built to house not men but machines. Every decade the machines multiplied and became more complex; economic maturity (the capacity to support a family) came later; children no longer were economic assets; marriage was delayed; premarital continence became more difficult to maintain. The city offered every discouragement to marriage, but it provided every stimulus and facility for sex. Women were "emancipated" — i.e., industrialized; and contraceptives enabled them to separate intercourse from pregnancy. The authority of father and mother lost its economic base through the growing individualism of industry. The rebellious youth was no longer constrained by the surveillance of the village; he could hide his sins in the protective anonymity of the city crowd. The progress of science raised the authority of the test tube over that of the crosier; the mechanization of economic production suggested mechanistic materialistic philosophies; education spread religious doubts; morality lost more and more of its supernatural supports. The old agricultural moral code began to die.

Religions can also be understood, in part, as adaptations to different niches. From Signalling, Solidarity, and the Sacred:

Even some of the most modern aspects of human behavior are ecological in nature:

Companies, cities, and even entire economies are metabolic processes in the same way plants, animals, and humans are. It's not unreasonable to ask about the BMR of a nation, for example.

History is subject to geology. Again from The Lessons of History:

Geography is the matrix of history, its nourishing mother and disciplining home. Its rivers, lakes, oases, and oceans draw settlers to their shores, for water is the life of organisms and towns, and offers inexpensive roads for transport and trade. Egypt was "the gift of the Nile," and Mesopotamia built successive civilizations "between the rivers" and along their effluent canals. India was the daughter of the Indus, the Brahmaputra and the Ganges; China owed its life and sorrows to the great rivers that (like ourselves) often wandered from their proper beds and fertilized the neighborhood with their overflow. Italy adorned the valleys of the Tiber, the Arno, and the Po. Austria grew along the Danube, Germany along the Elbe and the Rhine, France along the Rhone, the Loire, and the Seine. Petra and Palmyra were nourished by oases in the desert.

Finally, I'll leave you with this: a humbling, awe-inspiring history of our universe at the broadest possible scale. It's the story of matter in pursuit of lower energy states, finding ever more complex ways of organizing itself:

Originally published March 12, 2013.
Melting Asphalt is maintained by Kevin Simler. I publish pretty infrequently, so you might want new essays delivered by email: