The Elephant in the Brain

The Elephant in the Brain: Hidden Motives in Everyday Life — my first book, coauthored with Robin Hanson — is now widely available.

You can find the ebook version on Kindle, Google Play, and iBooks. It's also out in hardcover from Amazon, Target.com, and other online retailers. (Cheapest we've seen is on Alibris). And today, I'm thrilled to announce, it can be found on shelves in actual brick-and-mortar bookstores: 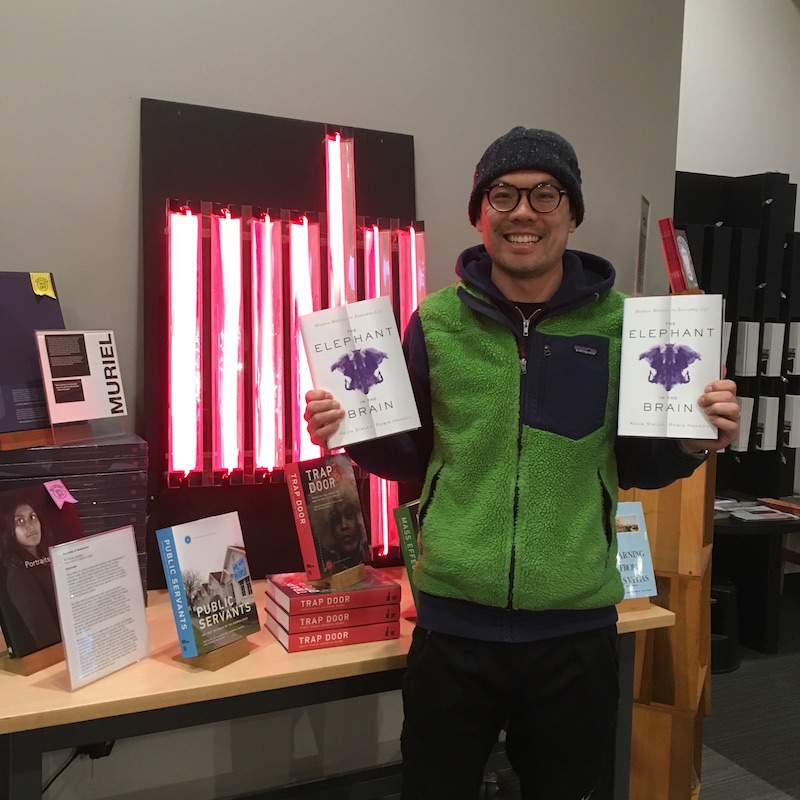 This was a years-long journey — including more than a year and a half since finishing the manuscript! — and I'm extremely proud of what Robin and I have produced. I'm also grateful to readers of this blog. Without your support and encouraging comments, I doubt I'd have had the confidence to write a whole flippin' book.

10 reasons to read The Elephant in the Brain

For longtime Melting Asphalt readers, I'm pleased to report that the book is entirely new material — well, aside from a few dozen paragraphs that I couldn't help reusing.

The book is currently pulling 4.5 stars on Amazon and 4.4 on Goodreads. People on Twitter generally have nice things to say about it. Our publisher, Oxford University Press, used a "peer review"–like process in deciding whether to publish it, and all seven of our academic reviewers were positive. (Thanks, whoever you are!)

Our blurbs were great. Jason Brennan describes it as "the most comprehensive, powerful, unified explanation of human nature and behavior to date." Scott Aaronson calls it a "masterpiece." Steven Pearlstein, a columnist at WaPo, gave us our best blurb by describing the book as a mashup of "Charles Darwin, Dan Kahneman, and Malcolm Gladwell." You can read more here.

Other endorsements from early reviewers:

So yeah: I'd say the book is off to a good start.

3. It will change how you see yourself

Julia Galef once proposed a three-stage model for sophistication in thinking:

The Elephant in the Brain is all about Stage 3 and the sobering realization that our minds aren't just hapless and quirky, but downright devious.

So where can we turn when our own minds are lying to us? A: We have to triangulate ourselves from theoretical priors and behavioral data. That's what Robin and I attempt to do in Part I.

4. It will change how you see the world

5. The book is chock full of explanations

Robin and I discuss many complex and counterintuitive human behaviors, but we always try to get at the "whys" behind them. And we aim for real causal explanations, not just weaselly associations or correlations.

Of course, we tried our best to provide only true explanations. But, in the spirit of bold inquiry, we almost certainly overstretched our case in a number of areas. And we're hoping that you, dear reader, can shed light on some of these mistakes and help us see more clearly.

7. The book is part of an open-ended discussion

In Part II, we provide "hidden-motive" explanations for 10 areas of social life:

But as Robin points out on his blog, there are many other areas in need of similar treatment, and we hope other people will join us in finding and illuminating them.

As part of the discussion, here are some early reviews from people in the blog­o­sphere: Don't Break the Vase, Joyous and Swift, Chimp Manager.

8. The book draws from many of my intellectual heroes

The main sources of inspiration were Geoffrey Miller, Robert Trivers, and Robert Kurzban, all of whom provided excellent "giant shoulders" to stand on. But I'm pleased that Matt Ridley, Jonathan Haidt, Steven Pinker, and Dan Dennett also make a few key appearances in the book.

On a more personal note, Robin himself has long been an intellectual hero of mine. To put it in context: he's probably responsible for more of my worldview than anyone else alive today. If you're not familiar with Robin, he's a "professor of economics at George Mason University" — but that label hardly does him justice. He's more of a polymath, having published in fields as diverse as artificial intelligence, cosmology, evolutionary biology, philosophy, physics, politics, and sociology. His weird, wonderful mind seeks deep principles and unifying explanations everywhere, but in a way that's somehow uncorrelated with the approach everyone else is taking (for good and for ill!).

So it was a real treat for me to get to work with Robin on this project — and the result, I think, is firmly in the Hansonian tradition.

9. The book itself is an experiment

When I first approached Robin to see if he wanted to write a book with me, I described it as an "alternative to a PhD." You see, I had already been in grad school once, and knew I didn't want to return for a traditional five-year doctorate. But a book seemed like a comparable project. Both involve intensive research and a long written summary of that research, and both yield a credential of sorts. I'm not going to be "Dr. Simler" at the end of this project, but I'll still have something of substance to put on my byline.

Of course, I realize that a book doesn't meet the same standards of academic rigor as a doctoral dissertation, and I'm under no pretensions that this project makes me an expert in anything. That said, the decision to do a book instead of a PhD has many advantages, and I'm surprised more people don't take this path. In part, I hope the book can light the way for others.

Naturally, we've buried it in one of the later chapters [cheesy grin].

Alright, that's it. Thanks for putting up with my self-promotion. Truly, though, I would be honored if you choose to read this book. And if you write about it anywhere on the web — your blog, Twitter, a review on Amazon or Goodreads — please get in touch and let me know.

Originally published January 3, 2018.
Melting Asphalt is maintained by Kevin Simler. I publish pretty infrequently, so you might want new essays delivered by email: