The Ecology of Personal Politics

We fancy ourselves reasonable creatures. And it's true — our lives are suffused, if not with Reason, then at least with reasons. The world we inhabit demands we justify ourselves and we dutifully oblige, emitting all sorts of "because" clauses in defense of our beliefs and behaviors.

But to a first approximation, reasons aren't in the driver seat. Instead we confabulate constantly. You wouldn't expect an argument with the press secretary to influence the President (at least not directly), and you shouldn't expect arguments to change individual minds either. Like the White House, each of us has a glib PR agent spinning stories to justify our prejudices — and we suffer alarmingly little cognitive dissonance in the process.

Politics, like religion, isn't really about beliefs. To better understand the phenomenon of politics, we'll need to look deeper. As I wrote last year:

And also, I would add, study the incentives that produce the actions. That's why we're going to look at politics though the lens of ecology — the study of agents and their environments.

Here's an example to get started.

It's commonly held that in politics (and in life), people grow more conservative with age. [1]

If you're already a conservative, you might chalk this up to experience. Age begets experience, experience begets wisdom, and wisdom leads to conservatism. Naturally!

But this kind of partisan thinking obscures — as it always does — the more interesting point: that we aren't fully the authors of our political beliefs.

If you understand liberalism as the politics of change (similar to Sowell's unconstrained vision), and conservatism as the politics of stability (Sowell's constrained vision), it's easy to see why older people benefit from conservative politics. They're less adaptable, more set in their ways. And, having built more of their lives (knowledge, relationships, etc.) around the status quo, they simply have more to lose when things shake up.

It's not just self-interest, though, that turns older people conservative. They genuinely feel that a stable society is better for everyone, because they project the strategy that's good for them onto the rest of the population. How could anyone NOT want stability?, they quite reasonably think.

The same — or rather the converse — applies to liberals. All else being equal, liberalism (of Sowell's variety) is a higher variance strategy. Young people, with their notorious appetite for risk, are instinctively drawn to the politics of change, and they project those instincts on everyone else. The world is so broken! they think. How could anyone NOT want things to change?

I'm not here to weigh in on this dispute. I'm just pointing out that we're influenced by a number of non-rational factors and processes (like aging) that shape our beliefs in predictable ways.

Or to use a metaphor: We live in a field of incentives which exert force on our beliefs, and more often than not, our beliefs fall in line.

A niche is often described as a feature of an environment — a set of resources available for an agent (organism) to make its living, along with potential competitors and other constraints.

A strategy is the dual of a niche. They're two words for the same concept. A niche is the 'negative space' in an ecosystem that gets 'filled in' by an agent's strategy.

So we might say, for example, that there's a niche in our political system for demagoguery, or we might describe an individual politician as "pursuing the demagogue strategy." But in both cases we're talking about the same thing.

A model for political affiliation

Note that these processes (niche selection, adaptation, and construction) aren't steps in a one-shot linear progression. Instead they are ongoing activities, feeding back on themselves and never fully terminating. We're constantly re-evaluating our niches, refining our strategies, and refocusing our efforts.

As we discussed above, preference for change/stability is one example of how a niche can influence political behavior. But there are many other examples.

Let's look at some of them.

In a small group, there are three basic niches — three strategies an agent can pursue:

Communal, hierarchical, and individual strategies correspond roughly to the three political stances: liberal, conservative, and libertarian. Of course this is a gross simplification — there are dozens of other factors to consider, and the strategies aren't even mutually exclusive. But the concepts are still useful for reasoning about certain aspects of political behavior.

These three strategies (which might also be called attitudes) start to develop when we're very young. Consider the following schoolboy archetypes:

As these boys grow up, leave their childhood enclaves, and begin to orient themselves within the larger political ecosystem, they naturally view it through the lenses/strategies they developed as children. They've mastered three different sets of skills — specialized for three different niches — and they will naturally wish to organize the world to suit those specific skills. As such, Colin is likely to adopt the liberal worldview and align with other liberals; Harry will adopt the the conservative worldview and align with other conservatives; and Ivan will adopt the libertarian worldview and align (if not ally) with other libertarians.

Again, I'm ignoring all the confounding factors in order to highlight a tendency. These are archetypes — not real people.

If this is true, it's especially interesting that Harry, who cultivates loyalty and proximity to his (overwhelmingly liberal) teachers, doesn't adopt their political beliefs. Instead of becoming a liberal himself, he develops into a conservative. This is because his beliefs proceed from his niche/strategy (courting authority), rather than from the authority figures themselves.

Another influence on the development of political beliefs is differential loyalty.

Even a staunch individualist has loyalty to some groups of people. The question is: which groups and how much loyalty?

Plotting these values produces what's known as a loyalty curve. [2] Here's how it works. On the x-axis you list out various groups, starting from yourself and your family and moving outward in larger circles (more-or-less concentric) until you arrive at 'all of humanity'. Then, on the y-axis, you plot the amount of loyalty you have toward each group. There's no great way to measure it — just use your intuition. You might ask yourself, How much would I be willing to sacrifice in order to benefit each entity?, then divide by the size of that entity.

This gets interesting when you compare the loyalty curves of different sets of people. For example, here are stereotypical curves for a native citizen of the US vs. a native citizen of Iraq (based on a discussion in The Clash of Civilizations by Samuel Huntington as well as this page): 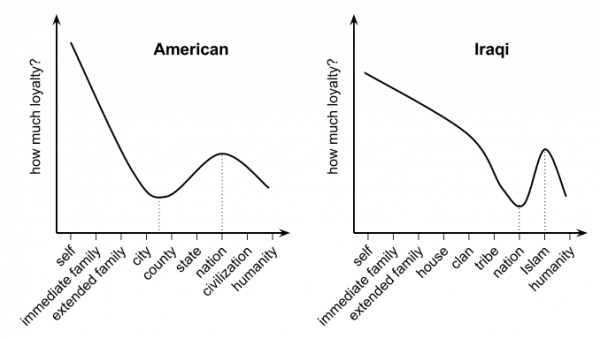 These are extremely handwavy graphs, but the exact values aren't important — only the relative values. Note that for an American, loyalty bottoms out around county and peaks again at nation — whereas for an Iraqi, loyalty bottoms out at nation and peaks again at civilization (Islam). As you can imagine, these different loyalty structures make it hard to graft a political system from one country onto another.

Now, returning to political behavior in the US, consider:

The Democratic party is more cosmopolitan, more prone to loyalty (or at least rhetoric) that includes all people regardless of their citizenship. The Republican party, on the other hand, is more nationalistic, more likely to speak about "American interests" or "America and its allies."

And where do these loyalties come from? Myths and stories play a role, certainly, as they do in forging any kind of group identity/loyalty (religious, political, ethnic, etc.). But by far the biggest effect comes from (mere) association.

Cities are cosmopolitan. Rural environments are provincial. Depending where you spend time, you'll naturally (and probabilistically) develop different loyalty structures — different strategies for navigating and succeeding in the world.

I grew up in the San Francisco Bay Area, a melting pot if ever there was one. A majority of my friends had ties to other countries, being either immigrants themselves or born to immigrant parents. My first- and second-degree networks included a significant number of non-citizens. In such an environment, it's hard to develop a strong preference for the US over the rest of the world. And while I can't say the experience made me a Democrat, I've always felt alienated by Republican rhetoric, for precisely this reason.

But it would feel different growing up in rural Kansas, I imagine. If I were a fourth-generation American, along with all my friends, classmates, and (nearly) everyone else in my city, it would be very natural to develop a strong sense of national pride and loyalty, and to feel naturally drawn to the Republican party.

I don't want to belabor the idea, but here are some other 'ecological' factors that shape political beliefs and behaviors:

Thanks to Lee Corbin for a discussion that sparked some of these thoughts.

[1] more conservative with age. This is (apparently) disputed. See here and here for example. I reject those results a priori, but you may want to take a different view. See also here for an overview of conservative vs. liberal thinking styles.

[2] loyalty curves. I first learned about this concept from Samuel Huntington's Clash of Civilizations. It's been useful for understanding a lot of human social behavior, from national and international politics to loyalties within a company.

Originally published January 23, 2013.
Melting Asphalt is maintained by Kevin Simler. I publish pretty infrequently, so you might want new essays delivered by email: