Humans, too, are biological organisms, i.e. lumbering caches of energy-rich meat-jelly, and therefore attractive targets for predators and parasites. Unsurprisingly, then, we've evolved a variety of mechanisms for securing our borders.

You're probably familiar with most of these. First we have skin for keeping us moist and protecting us from the elements. We have territorial instincts for guarding our bodies and personal space (making it harder for enemies to sink their teeth and claws into us). And we have an immune system — that army of microscopic robots built to defend our bodies against parasitic invaders looking for a quick feast. 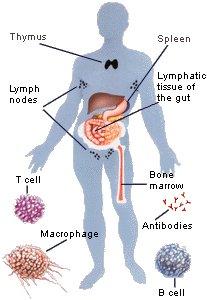 Now this picture of the immune system isn't wrong, exactly, but it is misguided. Specifically, it's an instance of the fallacy (so common to the West) of carving organic systems into separate parts and assigning each part a distinct purpose.

This is bad thinking because it's not how Nature operates. Nature — natural selection — didn't sit down with a blueprint of the human body, scheme about where to put the "immune system," and then earmark the lymph nodes, bone marrow, and white blood cells. Nature is a lazy, sloppy engineer who doesn't care a whit about clean design, but instead is rabidly, single-mindedly focused on getting the job done — wherever or however it needs to happen.

In this case, her goal is simply to prevent and mitigate disease. And so any part of the organism that can help in this effort is functionally (as far as Nature's concerned) part of the immune system. From the perspective of natural selection, then, our brains, just as much as our T cells, are legitimate members of the border-security team.

The brain's role in preventing disease is known as the behavioral immune system [1]. It's the set of instincts (evolved behaviors and mental habits) designed to keep microscopic baddies out of our bodies. As Douglas Kenrick and Vladas Griskevicius describe it in The Rational Animal:

Most familiar, perhaps, is the emotion of disgust, which tells us to steer clear of feces, body fluids, rotting meat, and anything that produces a foul odor, all of which are likely vectors for disease.

If anything smells wrong, don't eat it. If it tastes wrong, spit it out. And if (God forbid) it's already been swallowed, and only then we discover that it was harboring microbial terrorists, then get it out ASAP, using either end of the digestive tube (or both). This is the reaction known as food poisoning, after which we hold a grudge against the offending food, in some cases for the rest of our lives.

Those microbes almost killed us, after all. Never forget:

Now it would be nice, in some sense, if our disease-avoidance instincts regulated our contact only with objects or food likely to be carrying disease. But then they'd be doing a half-assed job, because our ancestors also had to contend with contagion from other humans.

You probably know, for example, that women in the first trimester of pregnancy experience morning sickness, which is Nature's way of protecting the baby from toxins when it's most vulnerable. But did you also know that women in their first trimester are more xenophobic? Nature's "reasoning" here is the same: limit contact with anything that might harm the baby (including foreigners who are likely carrying foreign germs).

Here are a few more ways in which our social behavior is designed to serve the goals of the immune system:

If these things seem hard to believe as functions of the immune system, remember: (1) Nature doesn't give us the germ theory of disease; she finds it much easier to simply make us feel disgusted or uneasy in the presence of certain obvious symptoms. And (2) Today we live in a relatively sterile environment (perhaps too sterile), but throughout most of history our ancestors were contending with deadly and extremely poorly-understood microbial threats. Have you ever worried about leprosy? Me neither — but most ancient cultures (for which we have good records) were terrified of it.

Of course, no overview of the behavioral immune system would be complete without at least passing reference to sex and religion.

Kenrick and Griskevicius again: "One study by Josh Tybur and Angela Bryan found that when people were exposed to an unpleasant odor, they were more willing to use condoms."