Sports are Rituals of Solidarity

Think of the vast crowds that gather in stadiums, wearing the same colors, singing the national anthem, cheering and yelling together, chanting, and experiencing tension and relief, elation and defeat, all at the same moments.

When the home team wins, everyone leaves beaming and full of pride. When they lose... well, at least everyone feels the same defeat. 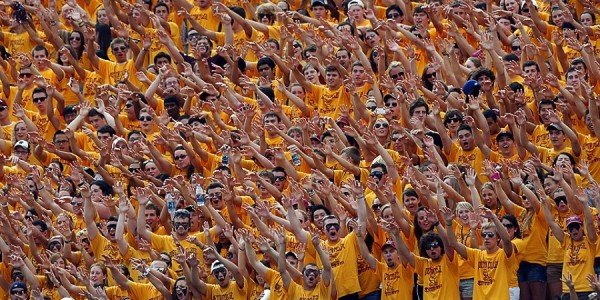 And humans love this. We pay for expensive tickets, drive for hours, wait in long lines, and allow ourselves to be herded like sheep, only to sit in hard plastic chairs, often in terrible weather, at a distance that makes the game nearly unwatchable... all of this when we could easily watch on a big screen HD TV with all the comforts of home.

Why? Because we get off on that feeling of synchrony. The body is an input device to the brain, and putting your body in a stadium alongside other bodies and making it do the Wave is a cheat code for unlocking feelings of solidarity and excitement that are almost impossible to achieve otherwise.

There's a theory about junk food that says it's a superstimulus acting on our evolved tastes for sweet, salt, and fat. We're wired for pleasure when we eat something sweet, salty, or fatty because in our ancestral environment those foods helped us survive. Now, in the modern world, we've found ways of creating foods that are vastly better at tickling those taste buds and pleasure centers than anything our ancestors would have experienced.

Similarly, modern spectator sports are superstimuli that act on our tastes for synchrony and solidarity. We evolved to enjoy feeling like we're part of a big team — it probably helped our tribes (of 50 to 200 people!) stick together and outcompete other tribes. But our ancestors would have known nothing like a World Cup match.

Wikipedia says that fan loyalty, particularly for team sports, is different from brand loyalty. If a consumer buys a product of lower quality than expected, he or she will usually abandon allegiance to the brand. Fan loyalty, however, often continues even when the team performs poorly year after year.

And this makes sense, because sports are largely driven by group loyalty, whereas consumer brands are driven by individuality identity and self-expression. Brands are a way of saying, "This is who I am!" whereas sports are a way of saying, "These are my people!" So while you might abandon a hairstyle or handbag as soon as it goes out of fashion, you should never abandon your people, no matter how bad things get.

In particular, sports are a way of signaling regional loyalties. Imagine a local politician who didn't root for the home team. I don't think such specimens exist, because a large number of their constituents simply wouldn't trust them. "Why don't you root for our team?" they'd worry. "Are you not on our side? Are you not one of us?" And they'd be right to worry, because what kind of a person doesn't pick up the attitudes and sacred values of the people around him? Only people who are aloof or don't care about others, or people who (god forbid) have other allegiances. Certainly not people you'd want to elect to local office, or even do business with.

This is why sports can become so tantalizingly close to religious in nature. Both sports and religions are about binding human communities together. They just go about it in different ways.

Originally published September 14, 2012.
Melting Asphalt is maintained by Kevin Simler. I publish pretty infrequently, so you might want new essays delivered by email: