Lately I've been thinking about professional growth, or how to avoid stagnation in the workplace. It's not the biggest issue we're facing right now at Palantir, but the stakes are high enough (as Rands puts it, bored people quit) that it's worth at least some consideration.

The standard approach to growth, whether professional or personal, is the first-person narrative approach. Growth comes from setting goals and striving relentlessly to achieve them, forcing yourself to do whatever is necessary — overcoming weaknesses, squashing obstacles, and building character.

In the growth narrative, you're the protagonist, an independent source of intention and action. Stories like this are very appealing, and they're how our brains were designed to operate. But it shouldn't surprise readers of this blog that we can also look at professional growth in ecological terms, using systems-thought instead of story-thought.

I don't mean to downplay the narrative approach. Most people find it very effective. Instead, my intent is to show how an ecological perspective can supplement — or in some cases, replace — the first-person, goal-oriented approach.

If that sounds like a stretch, bear with me. First we'll explore what a corporate ecosystem looks like (in words and pictures). Then we'll get back to questions about professional growth.

A niche (or role) is a subset of behavior-space. It looks like this: 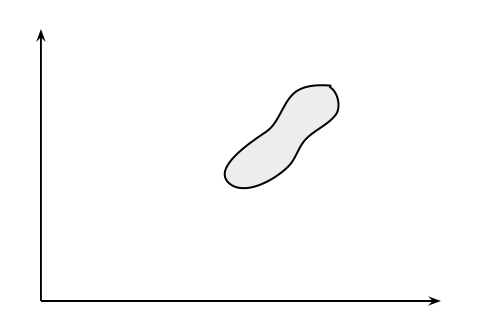 This is a very simple behavior-space consisting of only two dimensions, so you'll have to use your imagination to project to higher dimensions. Better yet, think of this diagram as evocative rather than precise.

An employee (let's call her Peggy) can be mapped onto behavior-space as well, by plotting her skills, i.e., the behaviors in her repertoire: 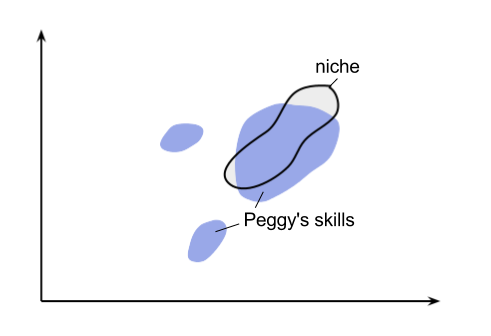 As you can see, Peggy fits this role pretty well, although not perfectly. And she has other skills that aren't required for her job, but which may be useful elsewhere.

A company employs many people to fill many different roles. Plotting them all together (and drawing only the behaviors that each employee uses on the job), we get something like this: 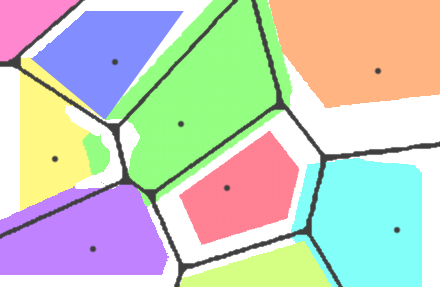 Here, nine coworkers — represented by nine different colors and nine dots (two of them off-screen) — are working together on a project. They have the task-space pretty much covered and they've divided the responsibilities pretty well. Most people are pulling their weight, although some slightly more than others.

This might remind you of a Voronoi diagram, where each region of the plane is 'controlled' by the point closest to it. It's not a perfect model of an ecosystem, but again, the intent is to be evocative rather than precise. You can play around with an interactive Voronoi diagram here.

Now let's zoom in on a particular employee+role and dial up the realism: 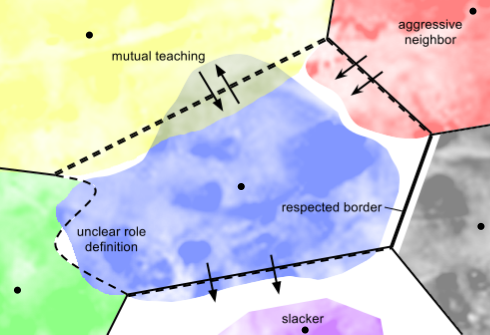 The boundaries are pretty haphazard. There's a lot of white space. Some roles overlap. There are gradations of skill, represented by shades of each color (stronger colors represent stronger skills).

The official boundaries of each niche (black lines) are provided by the formal requirements of the role — what you might find in the job description on the website, for instance. But the actual shape is defined by the incentives of the niche, i.e., which behaviors are rewarded and which are punished.

Particularly important in determining these incentives are the expectations of your immediate neighbors. Your job description might say X, but if you get shit from someone every time you do it, X might not be part of your niche after all. Likewise, you may not be formally required to do Y, but if the success of your project depends on it, and your neighbor isn't living up to his responsibilities, you will incur a cost unless you do Y. Thus Y is (de facto) part of your niche.

Whenever you work with someone, your two niches share a border. Borders are very complicated. They're the outcome of territorial negotiations, and they're modulated by the unique qualities of the people involved, by their interactions over time, by the other people in the neighborhood, and by the culture in which they're embedded.

For our purposes here, it will suffice to note that each border exerts a different kind of pressure on a niche. Some borders exert a narrowing pressure (competition, aggression), some exert a widening pressure (collaboration, mutual teaching), some are hard boundaries, some are semi-porous. Some are guarded by barks, others by bites, and some aren't guarded at all, but are invitations — "Come on in and play!" It's a bit off-topic, but the borders between an "ask culture" person and a "guess culture" person are especially tricky.

Now, armed with a mental model and some images, we can get back to professional growth.

So you've been in your job for a couple years, you've pretty much mastered it, and you're wondering what's next.

In terms of professional growth, there's a clear path: move up. The niche above you is probably 'bigger,' and you don't have all the skills you'll need to succeed in that role, so there's plenty of room to learn and grow.

But what if you don't want to move 'up'? What should you do, and what should your organization do, to help you grow?

Well, moving up clearly isn't the only way to find a niche where you can develop new skills. Niches are all around you (some more visible than others), and each niche is a potential source of growth. Once you've extracted all the growth from your current niche, it's time to find greener pastures — but it doesn't matter where that niche is. All you need is an unoccupied niche where you don't yet have the complete skill set.

In a healthy ecosystem, the incentives provided by the people around you — about what your role is, how you should behave, etc. — will exert pressure on your behavior. If those incentives reward you for learning new skills, they will stretch you, bit by bit, in new directions until you're capable of things you never imagined.

Think of yourself as a marshmallow of skills being pulled by a vacuum of expectations. That's the central point of this article — that we all have a natural tendency to adapt our behavior to a niche, and that the right niche can be a powerful force for growth. 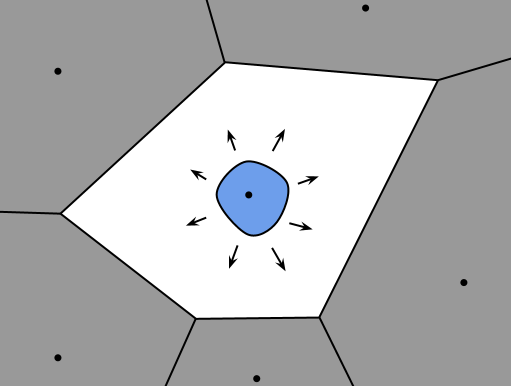 Of course the marshmallow analogy works the other way too: In a crowded space, others will jostle, squeeze, and constrain you, hampering your growth. That's why it's so important to find the right niche.

I have very little willpower. Instead, I’ve cultivated the art of putting myself in situations where the natural incentives force me to do the right thing. In other words, I try to choose my niches wisely.

I haven't said anything new here. All of this is just standard advice repackaged in a weird framework. So let's make it concrete.

Here are some specific ways you can change your niche:

With all of these approaches, your mantra should be: If the right niche doesn’t exist, I'll carve it out myself. You have to be aggressive and strategic about making a niche for yourself. A dramatic example of this is when Cortes scuttled his ships in Mexico, making irrevocable his commitment to stay in the Americas. By restricting the options for himself and his men, he radically changed the incentives of the entire group, forcing them to band together and commit fully to their mission.

The ugly side of niche-drive growth

The opposite of growth is stagnation, but there's something even worse than stagnation: growing in the wrong direction.

In a healthy ecosystem, adapting to a niche will produce positive changes to your behavior. But the situation can just as easily become pathological. Work in a role that lacks urgency for too long and you’ll start to get lazy. Work at a place that rewards unethical behavior and you’ll slowly learn how to justify your bad actions, and stop seeing them for what they are. Work as a trader for too long and you’ll start to see the world as a zero-sum competitive game. Work as a politician and you’ll soon have to believe your own lies.

(This dynamic — niche adaptation — probably accounts for some of the personality differences between the professions, although there's a huge self-selection component as well.)

Another dangerous niche is management. If you spend too much time in a managerial role, your behavior-space will become constrained by meetings, making it more and more difficult find the long, uninterrupted stretches required for serious writing or coding. Paul Graham wrote an excellent article about this, which should make anyone think twice before pursuing a role as a manager (or before dropping a meeting on someone's calendar).

Be careful also of the initial impressions you make. If you start off acting timid and small, your coworkers will quickly fill in the space around you, making your niche smaller and giving you fewer options. Don't be an asshole, but you may want to pick a judicious argument or two in your first few weeks on the job, to show your teeth and to assert interest in some of the space around you.

Originally published July 13, 2012.
Melting Asphalt is maintained by Kevin Simler. I publish pretty infrequently, so you might want new essays delivered by email: