There are no gods. Now what?

I'm ready to move past atheism. As so many have pointed out, it's a hollow belief system. Atheism is defined entirely by negation. It rejects false ideologies, but offers little in return: nothing concrete to believe in, and certainly nothing actionable.

I want to explore what a modern, godless, scientific religion might look like. Not just a worldview, not just an ideology, but a proper, full-blooded religion, fully compatible with the atheist sensibility.

It won't be easy, to say the least. As Andrew Brown defines it, religion is "a myth you can dance to" — and, well, you can't dance to atheism. Not yet, at any rate. But I think we ought to try.

First, though, we have some issues to work through — and here I'm speaking primarily to other atheists. We have a lot of baggage when it comes to religion, and we're going to need to work on that before we're ready to propose a religion (ack!) for atheists.

Religion is a tricky beast. It's an abstract concept, saturated with emotional connotations, yet with precious little consensus about what it even means.

This alone would make it all but impossible to get an objective handle on religion. But on top of everything, we atheists have created a climate of mockery and contempt. We aren't content simply to reject the false beliefs of others. We insist on ridiculing those beliefs — and condescending to the believers. In such a climate, how can we even begin to discuss religion objectively?

Look, I understand that there's value in being irreverent. As Scott Alexander points out, irreverence serves the (very legitimate) purpose of helping break the spell of religion. He writes:

There is — previously unappreciated by me — a large population of people for whom really dumb offensive strawmannish memes [on Reddit's r/atheism] are exactly what they need.

A lot of them were raised in religious families where they would have been disowned if they had admitted to their atheism. Some of them were disowned for admitting to atheism, or lost boyfriends/girlfriends, or were terrified they might go to Hell. And then they found r/atheism, and saw people making fun of religion, and insulting it, in really REALLY offensive ways. And no one was striking them down with lightning. No one was shouting them down. No one was doing much of anything at all. And to see this taboo violated in the most shocking possible way with no repercussions sort of broke the spell for them, like as long as people were behaving respectfully to religion, even respectfully disagreeing, it still had this aura of invincibility about it, but if some perfectly normal person can post a stupid comic where Jesus has gay sex with Mohammed, then there’s this whole other world out there where religion holds no power.

In other words, everyone's circumstances are different. And so even the silliest meme has the potential to help disenchant marginal believers.

Here's another way to look at it. All discussions of religion take place inside an ecosystem. This ecosystem includes believers (of all stripes) and non-believers (of all stripes), along with various loyalties, authority figures, and other incentives, and of course a huge number of competing ideas. Each of us occupies a slightly different niche inside the ecosystem — a niche defined largely by what we believe, how strongly we believe it, and who we are surrounded by.

We can simplify the ecosystem by plotting it as a single spectrum, from entrenched believers on the left to entrenched atheists on the right:

Now consider again those offensive, strawmannish Reddit memes that ridicule religion. (Here are a few of them, for reference.) These memes will have different effects depending where you sit on the spectrum:

Now if we want to treat this ecosystem as a battlefield, and if our goal is to win the 'war' against religion, then by all means, let the memes fly like bullets. And we should of course complement them with other, more serious strategies, such as those pursued by the "New Atheists" (Dawkins, Dennett, and their ilk).

But there's only so much value in this kind of ideological warfare. And, given my constitution, I don't think I'm suited for fighting. I'm more inclined to see these memes as a form of secular self-righteousness. If religious folks often do things (or say things) in an attempt to signal, "I'm holier than thou," then so much of atheist propaganda is an attempt to signal, "I'm smarter than thou" — or "more sophisticated," or "more of an independent thinker."

I realize I'm in a privileged position. I was raised, if not as an atheist, then at least relatively free from religious influence. There were no family members or a church pressuring me to believe, holding me captive to an ideology I then had to struggle against. Atheism came to me easily, some 20 years ago now, so I've had a long time to get over what few, minor scars religion might have left on my psyche. And most of my friends are non-believers, of one kind or another. All of this gives me the incredible luxury — unknown in the West for the past millennium at least — of feeling secure in my atheism, safe from the kinds of persecution I know others have experienced.

So yes, I'm privileged — but I want others to enjoy this privilege with me. I want to live among atheists who are comfortable enough, in our own godless skins, not to feel threatened by religion. And step one on the agenda is to put our mockery on hold — at least temporarily, in a few small, privileged corners of the world — so we can step back, let the bile recede, take a breath, and look around with fresh eyes.

Now if this attitude (derisive contempt) is familiar, it's because we've all seen it before, much closer to home, in the form of teenage rebellion. Even if you weren't a rebel yourself, you've seen the script play out, dozens if not hundreds of times — Catcher in the Rye, The Breakfast Club, Ferris Bueller.

Teenagers, in this script, face a problem very similar to the one faced by marginal believers. They've lived their entire lives under the thumb of an 'oppressive' authority — their parents — and as they grow up, they must break free in order to find out who they (as individuals) really are.

In other words, both teenagers and newly-converted atheists occupy the same type of niche. Both have lived under a more-or-less oppressive regime, and both are discovering that the regime no longer wields as much influence over them as they once thought. But it continues to wield some influence, so the result, predictably, is a power struggle.

A time-honored weapon in this kind of power struggle is satire. So the teenager benefits from adopting an attitude of derisive contempt for his parents, just as the marginal believer or newly-converted atheist benefits from adopting the same attitude toward his childhood religion. It's a signal of defiance, a means of creating distance between the individual and the authority.

But here's the important part. When the struggle is over — when the old authority no longer wields any meaningful influence — it's time to retire the weapons and make peace. 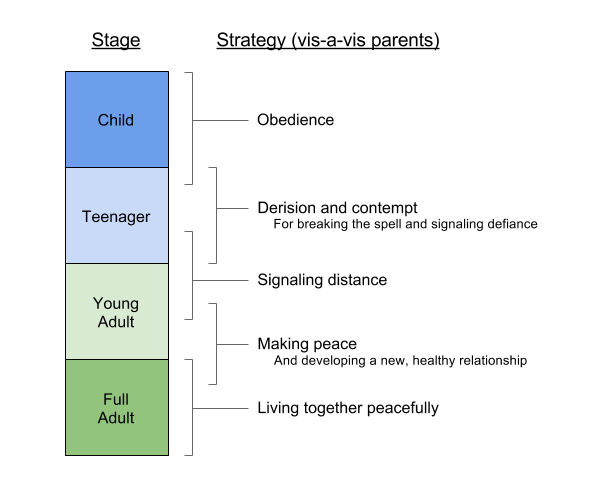 Once the teenager becomes an adult, he can begin to develop a new, healthier relationship with his parents. He doesn't need to cede any of the ground he's won. He's going to remain his own, independent person, and he's going to continue to reject (passively, if not actively) many of the beliefs and values of his parents. But at least he no longer needs to feel threatened — and that makes all the difference.

And when the relationship ceases to be a struggle, the teenager (now an adult) has the luxury of adopting a more objective view on his parents. He no longer needs to see them as wrongheaded idiots, keeping me down. He can begin to see his parents as people again — people with flaws, surely, but also people who were wiser than he could ever acknowledge (to them, or even to himself) during his struggle to break free. In other words, maybe his parents aren't so bad after all.

So, fellow atheists, I think it's time to grow up.

Let's put aside the urge to ridicule — if only momentarily, in the space afforded by these words. Yes, religions promote many silly beliefs. And yes, it's useful (for certain purposes) to make fun of those beliefs. But among ourselves, if we're no longer feeling threatened, we can let down our guards and try to understand religion for what it really is.

Let's also put aside our contempt. Sure, people have done all manner of terrible things in the names of their gods. But people are people, and one thing they're fond of is organizing into collectives. Sometimes those collectives go to war with each other, oppress the weak, destroy the planet, commit genocides, etc. — all while spreading self-serving ideologies to justify their atrocities. But religion holds no monopoly on these behaviors. They're just as likely to issue from corporations or governments as they are from religions.

And so, as adults, let's see if we can develop a new, healthier perspective on those old authority figures. We don't have to throw away all the lessons from our adolescent atheism, and cozy back up to our old religious beliefs and habits. To do that would be ridiculous, even irresponsible. But neither do we need to feel threatened. From our position of freedom and independence, we can (I hope) begin to see religion more clearly — for its flaws, surely, and the things we don't want to reprise in our own lives, but also for its deeper wisdom.

We have a lot to learn

When you feel threatened by something, it's hard to learn anything from it. But religions have lessons for all of us, if we can listen to them with an open mind.

Religions are some of the oldest institutions on the planet, and their ubiquity, across all cultures and such vast spans of time, should tell us that they're onto something — something that resonates on a very deep level with human nature. And if you're an atheist, the fact that religions persist in spite of their false beliefs should be even more impressive.

So that's the goal of this series: to look at religion from a calm, safe, post-atheist perspective, and to see what we can learn about human nature and how to improve our lives together.

In the next essay, I'll provide a "refactored" understanding of religion, to correct many of the misconceptions atheists typically bring to the table. And the ultimate aim, in the final essay, will be to synthesize a new religion for (post-)atheists — one that goes beyond simply rejecting old religious beliefs, to propose new myths and rituals for a brave new godless world.

Originally published July 8, 2013.
Melting Asphalt is maintained by Kevin Simler. I publish pretty infrequently, so you might want new essays delivered by email: