Parable of the Redwoods

or What Trees Can Teach Us About Human Intelligence.

My native California is home to the world's tallest tree species: Sequoia sempervirens or the coastal redwood.

The tallest living specimen towers a lofty 115 meters (379 feet) above the forest floor. Historically some may have been even taller, with evidence of redwoods reaching 122 meters (400 feet) and beyond. This is approximately the height at which capillary action ceases to work; any taller and a tree can't get water from its roots to its topmost leaves. So redwoods are, in a sense, as tall as arboreally possible.

Height, however, doesn't come cheap, whether for a redwood or any other tree. It takes a lot of energy and material to grow upward and remain standing in the face of wind and gravity — energy and material that could otherwise be put into growing horizontally (to collect more sunlight), strengthening one's roots, or making and dispersing more seeds (in the hopes of having more children).

So why bother? Why do trees put so much effort into vertical growth?

Well it depends on the species. Some grow tall to keep their leaves away from land-based predators. The most famous example of this is the evolutionary arms race between the acacia tree and the giraffe, which goes something like this: 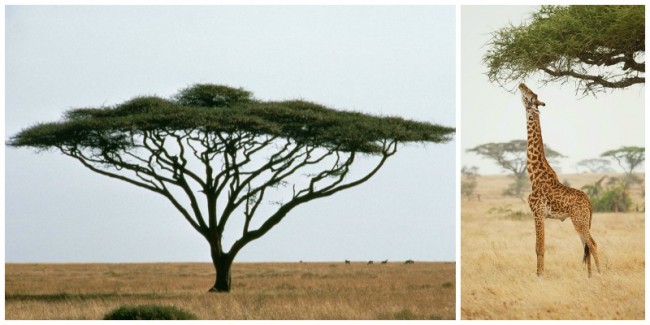 So predation is why some species (like the acacia) grow tall. But the vast majority of tree species do it because they need to compete for sunlight. A forest is an intensely competitive place, and sunlight a scarce but important resource. And even if you're a redwood, the tallest of all tree species, you still have to worry about getting enough sun because you're in a forest of other redwoods. 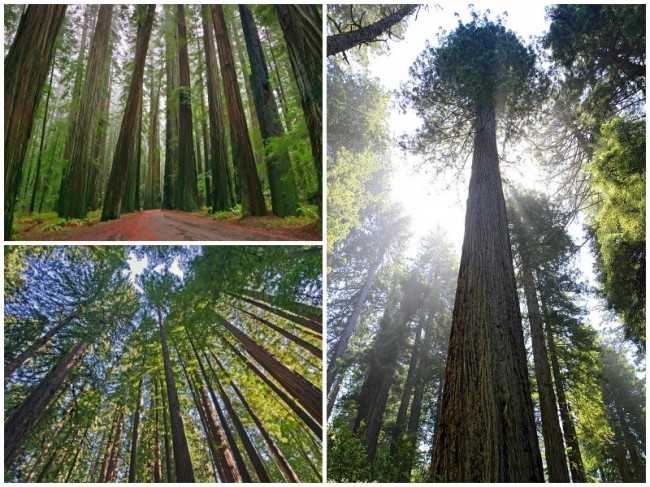 Thus the redwood is locked in an evolutionary arms race ("height race") with itself. It grows tall because other redwoods are tall, and if it doesn't throw most of its effort into growing upward as fast as possible, it will literally wither and die in the shadows of its rivals.

Often a species most important competitor is itself.

Now suppose we came upon a lone tree (redwood or otherwise) in a open field, towering far, far above the other plants and animals, with no other trees in its vicinity. Here, for example, is a wax palm in the Cocora Valley in Colombia: 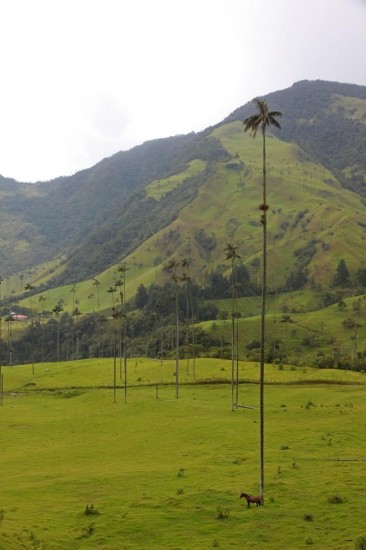 This is uncanny, right? The scene looks weird, even wrong, because it's not how nature usually does things. Why would a tree waste its energy growing so high above an open field? Wouldn't it get outcompeted by a shorter variant that threw more of its energy into reproduction?

Yes. And so we can reasonably infer that an open field isn't the wax palm's native environment. Instead it must have evolved in a dense forest. Actually, as it turns out (HT: Sarah), extremely dense: 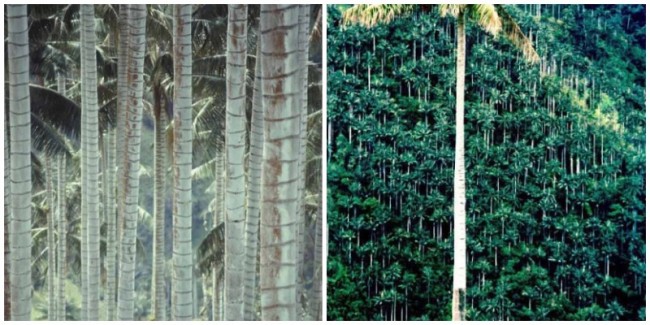 So the wax palm's height makes perfect sense — but only given the right context.

We can turn this into a rule of thumb:

Wherever we find a tall organism, we can reasonably infer that it evolved in an ancestral environment with other tall things.

This isn't a law of physics; it's not strictly, 100% necessary; but it's a good general heuristic.

Now consider the human being. Like the redwood or the wax palm, our species has a distinctive feature: we're the most intelligent and behaviorally flexible creatures on the planet. The $64,000 question is why — why are we so smart and flexible in our behavior?

If we think of Homo sapiens like the lone palm in the open meadow, towering in intelligence over an otherwise brain-dead field — then of course we'll be puzzled. Such intelligence would seem out of place, uncanny, unnecessary: 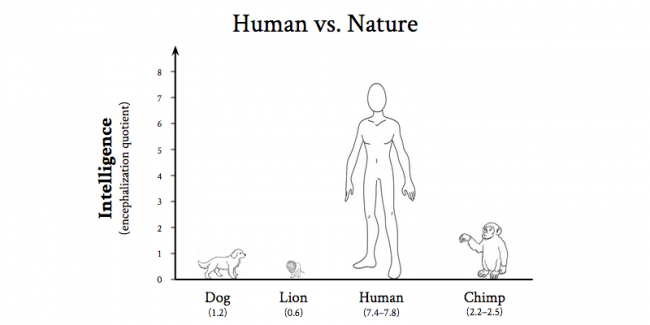 But of course that's not the right way to think about it. We didn't evolve in the meadow, metaphorically speaking; we evolved in the dense forest. And like the redwood and the palm tree, we weren't competing primarily against other species, but against ourselves:

The earliest Homo sapiens lived in small, tight-knit bands of 20 to 50 individuals. These bands were our "groves" or "forests," in which we competed not for sunlight, but for resources more befitting a primate: food, sex, territory, and social status. And we had to earn these things, in part, by out-witting and out-shining our rivals.

It's in that struggle that we, like the redwoods, developed some of our most distinctive characteristics.

Originally published March 13, 2015.
Melting Asphalt is maintained by Kevin Simler. I publish pretty infrequently, so you might want new essays delivered by email: