Today I'd like to explore rituals that influence the way we think about the social world around us.

Previously we saw how humans bond with each other through rituals of sacrifice. The basic idea is that human groups (religions, nations, tribes, etc.) need relatively selfless members in order to function smoothly, and public displays of sacrifice are honest signals of selflessness.

These two types of rituals work together to make social life possible, especially in large groups. They are weapons in an ongoing war against our selfish, primate instincts. In an effort to tip the scales, rituals of sacrifice work at curbing our selfish tendencies, while rituals of solidarity push us to be more focused on our group: 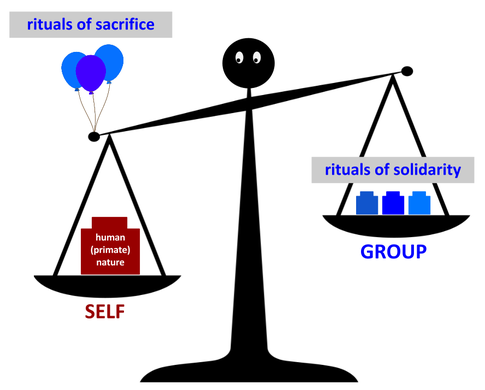 (Meanwhile, most of our instincts call out for us to act selfishly; the effort at tipping the scales is decidedly an uphill battle.)

Rituals of solidarity are all around us. Once you know to look for them, you'll start to see them everywhere.

The most common feature of these rituals is synchrony, the state where two or more people do or experience the same thing at the same time. This can mean marching together, clapping hands to a beat, or even just laughing together. 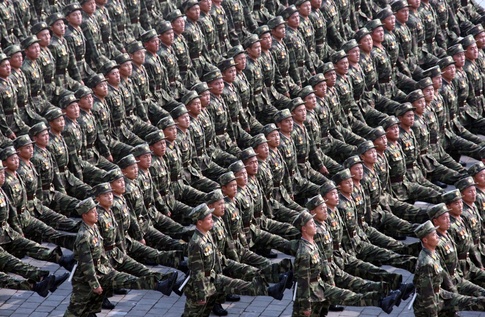 A perfect example of a ritual involving synchrony is the high five. It's a simple act, but it involves both physical synchrony (getting your hands to align in time and space) and emotional synchrony (both people need to be in a good mood). If you've ever tried giving a high five to someone in a bad mood — or someone who doesn't like you — you'll know what I mean. After giving someone a high five, you're likely to feel happier and more like part of the same team.

In a fascinating series of experiments, Stanford psychologists Scott Wiltermuth and Chip Heath demonstrated the power of synchrony to produce solidarity. They first had groups of students perform synchronized movements (such as marching around campus together), then had them play "public goods" games to measure the degree to which individuals were willing to take risks for the benefit of the group. What they found is that:

Across three experiments, people acting in synchrony with others cooperated more in subsequent group economic exercises, even in situations requiring personal sacriﬁce.

If you're curious, their paper is very accessible.

Another feature of solidarity rituals is coordination. Unlike synchrony, (mere) coordination doesn't require that participants mirror each other's actions, just that everyone works together to participate in a shared action or to achieve a shared goal.

An example of a ritual of coordination is team sports. A game of basketball doesn't require strictly synchronized actions with your teammates, but it does require that everyone's actions harmonize toward the shared goal of winning. Play ball together with four friends and you're very likely to feel closer as a group, whether you win or lose (but especially when you win).

Because all of these phenomena — sacrifice, synchrony, and coordination — serve the same purpose (tipping the scale against selfishness and toward group solidarity), we should expect to find them working in concert with each other, rather than isolated into completely separate rituals. And that's exactly what we find. Most rituals of solidarity involve more than one of these phenomena, and some involve all three.

One of the most awe-inducing rituals on the planet, the hajj, stirs millions if not billions of people into a psychological whorl of synchrony, coordination, and sacrifice, creating a strong sense of unity and shared purpose. The Muslim community has, for its size, an incredible level of solidarity, in part because Islam has mastered the use of these types of rituals.

Let's look at some more examples.

For starters, in the military. Here you'll find all sorts of ritual mechanisms for conditioning soldiers to put the group's interest ahead of their individual interest. It starts with shared meals and shared living spaces, which create a basic synchrony of moods and actions throughout the day. Uniforms and standardized haircuts reinforce the idea that the group is more important than the individual.

Suppression of individuality is taken even further in experiences that are meant to humiliate, degrade, and otherwise lower the status of new soldiers. During Basic Training,

recruits are subject to "Total Control," meaning their every action is monitored and constantly corrected by drill sergeants. The first week of training is commonly referred to as "Hell Week," due to the intense period of adjustment required on the part of the new recruits.

In addition, marching exercises are a staple of military training, even if marching no longer plays a role in actual combat, because they create powerful feelings of synchrony in participants, which eventually translates to solidarity in battle. Other group exercises function much like team sports, training everyone in a unit to work together to achieve shared goals.

It's telling that all soldiers get the same, simple grave markers — even in death, the military insists on uniformity. If a beehive or ant colony buried their dead, they might find inspiration in any US military cemetery: 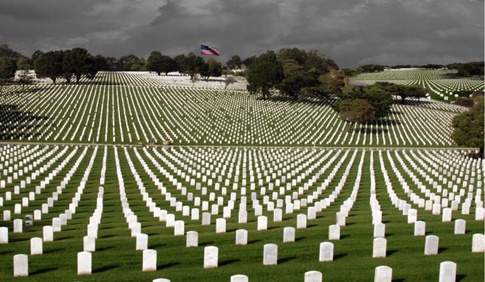 For contrast, here's a civilian cemetery in Queens, cluttered and chaotic from so many individual choices: 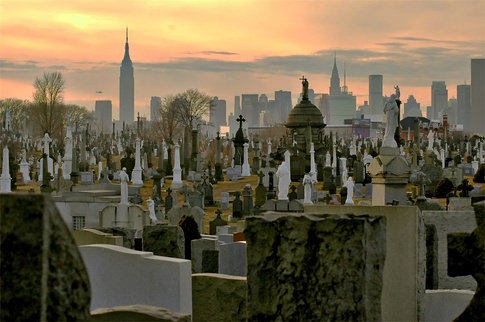 We discussed politics last time, when illustrating rituals of sacrifice, but rituals of solidarity are just as important. We mentioned chanting and singing, parades and pilgrimages. We should also mention rallies, like the Million Man March, which in addition to fostering solidarity among its members, is also a powerful signal of solidarity. Gathering hundreds of thousands of people together — each of whom must sacrifice time, energy, and money in order to participate — sends a powerful message of unity to other political actors: 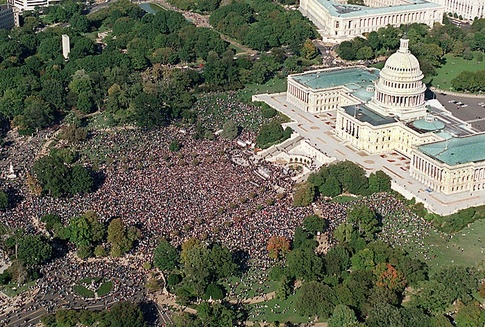 Entire nations use can signal solidarity through synchrony and coordination — for example, at the Olympic Games. Winning a medal in a team sport is certainly one kind of signal, but the host country has the potential to send an even stronger signal by coordinating the insane logistics of hosting the games, and also during the opening ceremony.

The Chinese definitely took the prize, in 2008, for an opening ceremony that sent the strongest signal of solidarity: 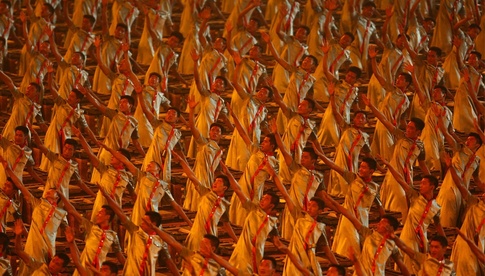 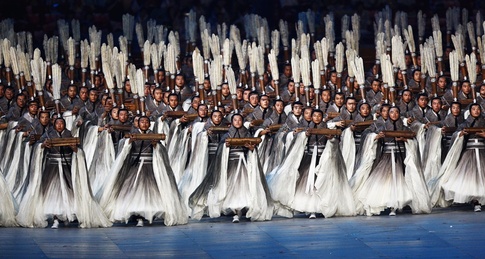 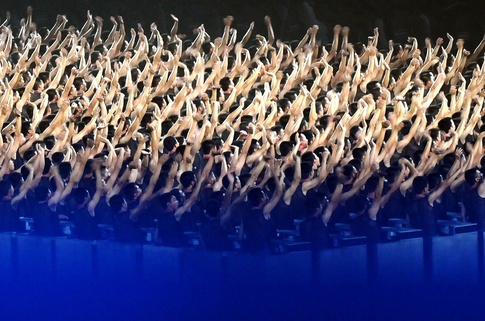 Rituals of solidarity positively abound in religious contexts. I don't want to belabor the point, though, because religion is a lot like politics in its use of ritual, and we discussed a lot of this already.

Rituals of solidarity also show up wherever children are being raised and educated together.

In schools, just as in the military, we see shared meals and sometimes uniforms. We see children putting on plays and pageants, flexing their powers of coordination. We see them performing group songs and dances, stoking feelings of synchrony. They do stretches and jumping jacks with each other during PE, and spend a lot of time standing in lines together. In the US, every homeroom throughout the country chants the Pledge of Allegiance together -- every morning.

Perhaps the most epic ritual enacted by students, at least in high schools around the US, is the weeklong circus of solidarity known as Homecoming. Here we find pep rallies, parades, and themed dress-up days (cowboy day, 80s day). Classes often compete with each other to build the best float, put on the best skit, or even just show the most unity. But the week always culminates in displays of school-wide unity such as wearing school colors, attending a bonfire (more on this in a minute), and of course cheering on the football team. The whole week is full of graphic, self-conscious displays of solidarity, and Homecoming game itself becomes a sacred event (sacred in Durkheim's sense, i.e., set apart and dealt with in a ritualized way by the community). 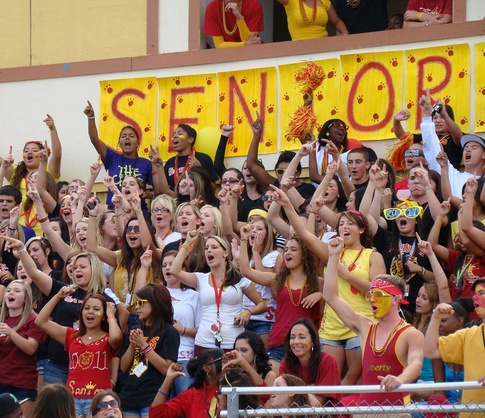 It should be no surprise that these rituals are prevalent in educational contexts. One of the explicit goals of education is socialization, which is just another word for trying to tip the scales, i.e., suppressing the individual and enhancing group instincts.

For reasons I won't even pretend to understand, humans are especially eager to bond with each other when gathered around a fire. The formula is simple:  5-to-500,000 people + flickering light = enhanced sense of community.

To illustrate this formula, here are some of the religious, political, and tribal rituals-of-fire from around the world: 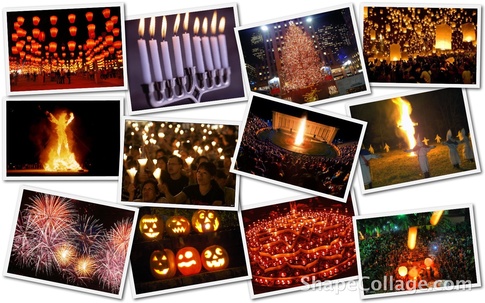 Note that this doesn't include the myriad pagan festivals devoted entirely to the worship of fire... or the quasi-religious role that the flickering light of television plays in our lives (ha).

We are social animals, primates with a taste for living in large groups. Today our communities are millions of times bigger than those of our remote ancestors, and rituals of solidarity have helped us reach this scale.

In primitive cultures, the central religious ritual is dancing and singing around a campfire with other members of the tribe. Our world now may be more complex, and our tribes much, much bigger, but the ritual uses of dance, song, and fire remain.

These are powerful tools. Just let's be careful with them. 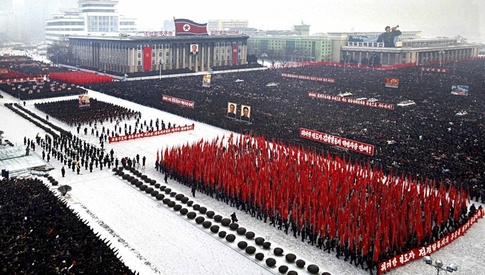 Originally published September 2, 2012.
Melting Asphalt is maintained by Kevin Simler. I publish pretty infrequently, so you might want new essays delivered by email: