Language for the Body

on poetry, metaphor, and trance states

If you've never seen poetry on a stage — poetry performed — you should. It's immersive and enthralling, a feast for all the senses. In the hands, face, voice, and body of a skilled poet, a poem can truly come alive.

"Animate," from the Latin animare, means to give breath to. Poetry, then, is language animated.

Watching Rives for the first time was revelatory. What struck me was how physical his poems are.

Rives is a performer, a man addressing an audience. He stands, moves, gestures, and projects his presence. It's no surprise his body is important. But what Rives made me realize is that all poetry is physical. Visceral. It's addressed not just to the ear or mind, but to the body of the receiver. It is language incarnate.

Here's how language usually works — prose that is. First, sound enters the ears. Then it's turned into an audio signal and routed to the auditory cortex. The job of the auditory cortex (along with Wernicke's area) is to process an audio signal into words. Then the brain mostly discards the audio signal — by ignoring or forgetting (which amount to the same thing) — so it can focus its attention on making sense of the words. The goal is to access the words' semantic content. Their particular physical form is irrelevant.

But with poetry it's different. Poems pertain to form almost by definition.

Consider these formal elements of spoken poetry: rhyme, meter, rhythm, alliteration, assonance, consonance, repetition. Each has a predictable physical (neurological) effect on our auditory systems. The result is that a poem makes us pay attention to the audio signal itself, in addition to the meaning of the words.

Eminem understands the physics of poetry:

His palms are sweaty, knees weak, arms are heavy,
There's vomit on his sweater already, mom's spaghetti.
He's nervous, but on the surface he looks calm and ready to drop bombs,
But he keeps on forgetting...

Poetry is most visceral when it's chanted, spoken, or sung. But printed poems have a similar (if weaker) effect, which they achieve by encoding information in the printed form itself: line breaks, stanzas, spacing, punctuation, capitalization, etc. Just as you need to hear a spoken poem to fully appreciate it, you also need to see a printed poem to access its full semantic content. 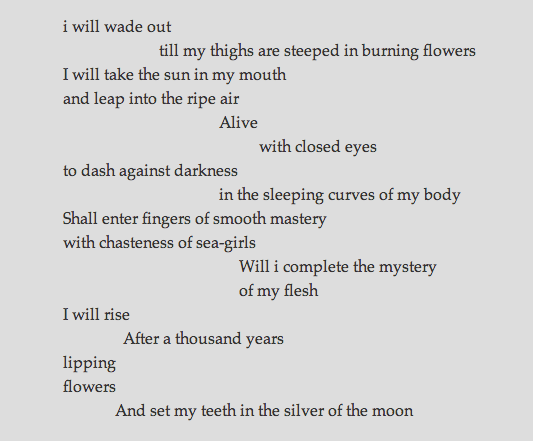 By encoding information in the physical form factor (whether sounds or images), poems force our brains to pay attention (more than they normally would) to raw sense data. This keeps our awareness from drifting too far 'up' into cerebral, analytical, self-conscious headspace — priming us for a more visceral experience. Priming us to feel.

But it doesn't stop there. Good poems also use imagery, emotional language, and metaphor. These devices activate further body-oriented regions of the brain, further starving the analytical, self-conscious neocortex.

Imagery, for example, can be tactile, kinesthetic, olfactory, gustatory, auditory, or visual. The brain processes imagery after it decodes the meaning of the words, but it still has to rope in the brain regions associated with each of those senses (e.g. the sensorimotor cortex). The result is more activation in those regions, which is just another way of saying that we're forced to pay even more attention to our bodies.

Emotional language plays a similar role. Hyperbole and understatement are two of the formal poetic elements that toy with our emotions, but it's more common just to use emotionally-charged words or topics. These devices give the limbic system more runtime.

Finally we come to metaphor. Along with its cousins (simile, metonymy, etc.), metaphor is a way of describing an abstract concept in terms of something more concrete. Life is an open road. All the world's a stage. Love is a battlefield.

Note the sleight of hand here. (And how poetry is like magic.) Where we might otherwise focus on the abstract concept itself (e.g. love), poems instead direct our attention to something much more visceral (chaos and death on a battlefield). This is powerful because we understand concrete, visceral experiences more directly. In fact, Lakoff would say that we can't understand abstract concepts at all, except when mediated through more concrete ones.

It's not that prose can't be all these things too. Prose can be full of imagery, even lyrical. But when it is, we call it poetic.

All of these elements come together on the stage. This is what makes performed poetry so hypnotizing. Rives, for example, is aural, lyrical, vocal, full of imagery and metaphor, and he throws his body into the performance. And his face. Alternating between expansive, powerful command of space and vulnerable stillness. Language can't get any more embodied than that.

(Unless perhaps you throw music into the mix. Thus the pleasure of watching a singer-songwriter up close at a small venue.)

For those of us in the audience, the result is a mild trance — and I mean that quite literally. Trance states all have one thing in common: the sense of self is suppressed. There are many ways to induce a trance — meditation, hypnosis, psychedelics, worship, rituals of the body, synchrony, sports — but they all work on the principle of self-suppression. Poetry is just another way to go about it: using language addressed to the body to prevent our brains from drifting into analytic self-consciousness.

Be careful, though. There's danger in opening yourself up to poetry, in letting language through the back door. Art can edify, but by the same token it can also corrupt, so watch what words you eat.

Originally published February 6, 2013.
Melting Asphalt is maintained by Kevin Simler. I publish pretty infrequently, so you might want new essays delivered by email: