When I started this blog, I promised myself I'd stick to substantive topics. 'Going meta' smacks of self-indulgence, and risks being a bore. But if there's a time for meta, it's the end of the year (holing up for the holidays, New Year's resolutions, etc.). So I thank you in advance for indulging me in one "Year in Review"-style post.

Summary of the year

This is my third attempt at keeping a blog — and the first time I've made it past ~15 posts. When I started writing again in March, I worried about having enough to say. Now I find myself constrained by time, not by ideas. It's a great place to be, and I'm very happy with the results so far.

Arranged by topic. Those in bold were the most popular.

Some posts straddle multiple topics, so I thought it would be fun to map them out: 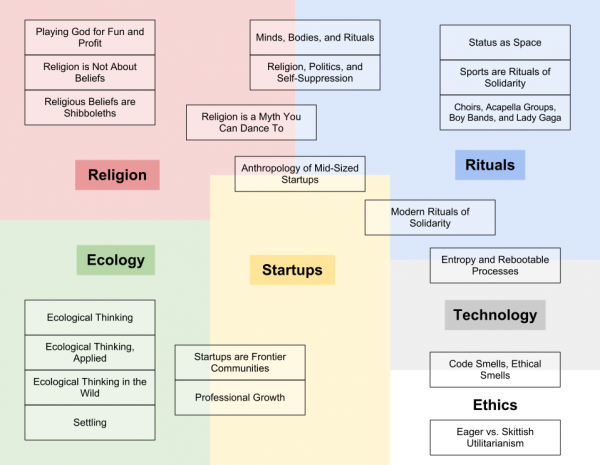 The big theme for Melting Asphalt this year was how the life sciences (biology, ecology, anthropology) can inform our other, non-biological activities (startups, engineering, professional growth). The natural world is wide, varied, and fantastically complex, so it's no surprise that life scientists have developed tools that are useful beyond their native domains.

Central to this enterprise is the idea of man-as-animal. [1] We are embodied creatures, situated in the world, anchored by our biology and our evolutionary heritage. I wrote a lot about religion and ritual, because both are at the intersection of our social and biological natures.

I feel I've just scratched the surface here, so expect more along these lines next year. Speaking of which...

One post per week. Even if it's a small one.

I did a fair amount of reading in 2012, but a few things stood out.

Jonathan Haidt's work on moral psychology was the most foundational. If the test of a first-rate intelligence is, as F. Scott Fitzgerald says, "the ability to hold two opposing ideas in mind at the same time and still retain the ability to function," then Haidt is truly a force to be reckoned with, and the world needs more people willing to think like him. His essay What Makes People Vote Republican was eye-opening and should be required reading especially for liberals and libertarians. (Don't worry, it's not an argument for voting Republican, just an honest attempt to understand the conservative moral worldview.) I also read The Happiness Hypothesis and The Righteous Mind, both of which are very accessible and very much worth reading.

The other great book I found in 2012 was Loyal Rue's Religion is Not About God. I can't in good conscience recommend it to anyone who isn't already fascinated by religion, but it was very rewarding for me. YMMV.

In terms of blogs, Robin Hanson's and Venkat Rao's continue to hit hard, year after year, and serve as paragons of the kind of thinking and writing I aspire to. I especially recommend Venkat's post A Big Little Idea Called Legibility. Beyond those two blogs, I've also been enjoying Genealogy of Religion and Meteuphoric.

Finally, the paper Signalling, Solidarity, and the Sacred was a rollicking (if dense) survey of the anthropology of religion. It's worth reading even if you aren't fascinated by religion because it explains a lot of tribal behavior (both religious and secular).

A conceptual metaphor links an abstract target domain (the one we want to understand) to a more concrete, familiar source domain. It's an exceptionally powerful tool for producing insight; if Venkat swears by the 2x2, I swear by conceptual metaphors.

Here are some of the metaphors I wrote about this year:

I started writing again because I had some thoughts I wanted to share, and Melting Asphalt has allowed me to do that. But I've been pleasantly surprised by the side-benefits:

These are some posts I started to write (enough to give working titles), but then abandoned. I may return to some of these next year:

I use a number of tools in the course of keeping this blog, but two in particular deserve shout-outs.

The first is Quora. I'm not a huge fan of Q&A (it's not my medium of choice), but I love the information ecosystem/economy that they've created, and I think it's a great place to share and spread ideas. I look forward to seeing what they'll do with their newly-minted mission in 2013.

The other tool I use is Workflowy. Workflowy is amazing; I can't say enough good things about it. Luckily others have: if you check out their testimonials, you'll find people waxing all kinds of romantic about it, with sentiments ranging from intimate to obsessive to awe-struck, and even to religious. Here's a sampling:

I don't often recommend software, but in this case I can't help myself. If you manage information for a living, do yourself the favor of trying Workflowy. It has the potential to change your life.

[1] man as animal. In the science/humanities divide, this puts me squarely in the science camp — though I cautiously crossed the line last week with a post on stories.

Originally published December 31, 2012.
Melting Asphalt is maintained by Kevin Simler. I publish pretty infrequently, so you might want new essays delivered by email: